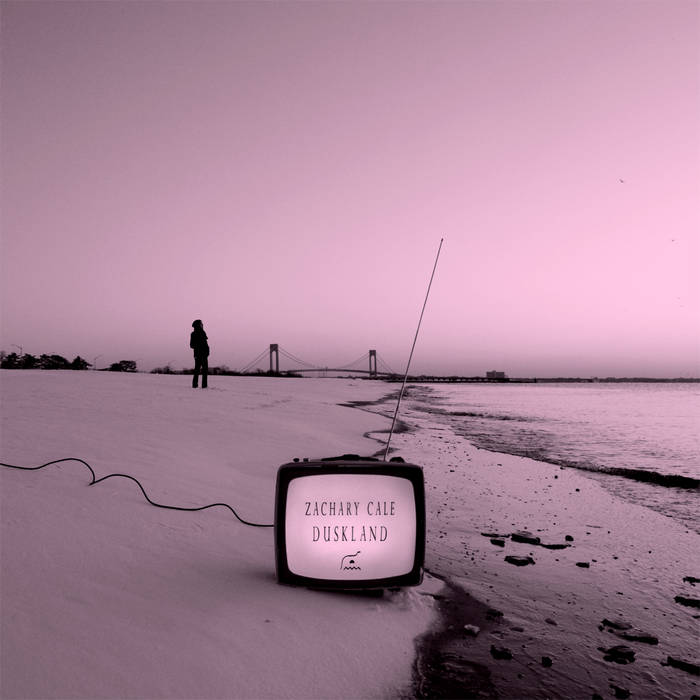 DUSKLAND is the fifth full length album by Zachary Cale. Released by NO QUARTER records on LP/CD/Digital on 8/7/15.

Please visit the NO QUARTER website to purchase physical formats. Both vinyl LP and CD are available through their web store.

Recorded off and on throughout 2013 - 2014 at VIR studios Brooklyn, NY by Matt Boynton. All songs written, performed by Zachary Cale (c) Ride Through The Rain Music SESAC 2015 except "I Forged The Bullet" co-written with Alfra Martini.

DUSKLAND is a work of exquisite craftsmanship full of elegant lyricism and mysterious imagery; a collection of songs that look directly into the face of darkness yet drive beyond it, forging new paths.

Allegorical in nature, Cale's songs move away from the inward reveries of his last album, BLUE RIDER, and divide outward into the voices of others. The album projects images of wide-open spaces and landscapes constructed from half remembered dreams. There isn't always a clear resolution, characters remain in a state of twilight, wandering from place to place in search of an undefined illumination. The lyric: "So many lifetimes I lived in one / I've got to bury them now / No surprises this time around / Not beneath this crown," taken from "I Left The Old Cell", aptly captures the human complexities found throughout the album.

Over the years Cale has performed both solo acoustic and with a full electric band. Although known for his deft guitar picking style, Cale downplays that aspect of his playing this time out, allowing other instruments to shine in a shared space. His unique acoustic playing is still prominent, often dictating the rhythmic direction of each song yet in this case its the notes that he doesn't play that strike a balance between his love of minimalism and melodic sensibility.

Taking cues from artists like Oh Mercy/Time Out of Mind era Dylan and Nick Cave's work with the Bad Seeds, Duskland evokes a restless spirit, one that is informed by American myths and tall tales. There's a Western flair to many of the album's songs with nods to soundtrack composers such as Morricone and the dream-laden noir of Badalamenti. Many of the album's highlights maintain a ceremonial grace. "Sundowner" opens the album with a lush organ progression played over a plaintive march. As the tension builds, Cale muses "Branded as a fugitive / Dressed in the clothes of an innocent / Sirens ricochet / From bloodless lips I hear them call my name". From there the album moves forward like one long processional; Cale leads his band through up-tempo folk rock and to lilting torch songs to minor key dirges and atmospheric instrumentals until ending with a horn section dragging over a funeral beat in the long form ballad "Low Light Serenade".

Zachary Cale is an American songwriter/musician based in NYC. False Spring is his 6th full length album. To be released May 29th, 2020.

Bandcamp Daily  your guide to the world of Bandcamp

Cannibal Corpse's George "Corpsegrinder" Fisher stops by for an interview